Tears of Joy for Lyall Cookward

Chapel Allterton youngster, Lyall Cookward, has found his voice after complex surgery allowed him to breathe unaided for the first time in four years. In 2012, Passmore Group carried out numerous Home Improvements & Extensions works to the Cookward’s property to aid in making daily life for Lyall and his parents easier and safer. 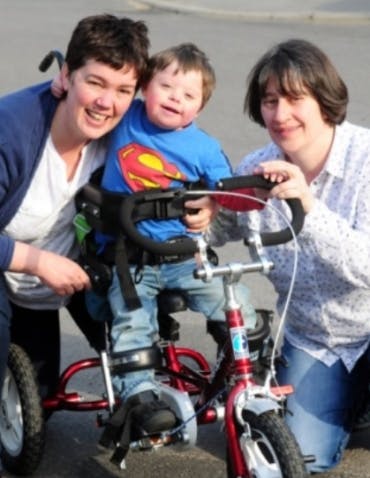 Lyall, who has down syndrome, suffered heart failure soon after birth and needed a risky operation, followed by more surgery. He was later diagnosed with a rare lung condition and spent six months in intensive care. After returning home, he was expected to be on a long term ventilator, possibly for life.

Lyall came off the machine, though he relied on the tracheostomy. His airway had collapsed but Lyall’s surgeon earlier this year said he could carry out a full reconstruction and now the four-year-old is benefitting more than anyone imagined from the life-changing procedure to remove the tracheostomy he relied on to breathe - Lyall’s first word on waking up from the operation was “mummy” – which he has never been able to say before.

Later this year Lyall will take part in the Jane Tomlinson Appeal Mini Run on May 11, while his 5th birthday will be celebrated by a fundraising party on June 6 at Moor Allerton Sports and Social Club, with an appearance from signing group singing hands - To donate, log on to www.justgiving.com/raiseasmileforlyall

The above article was published in the Yorkshire Evening Post – to read the article in full visit the following link:http://www.yorkshireeveningpost.co.uk/news/latest-news/top-stories/tears-of-joy-as-surgery-gives-leeds-lyall-his-voice-1-6571124