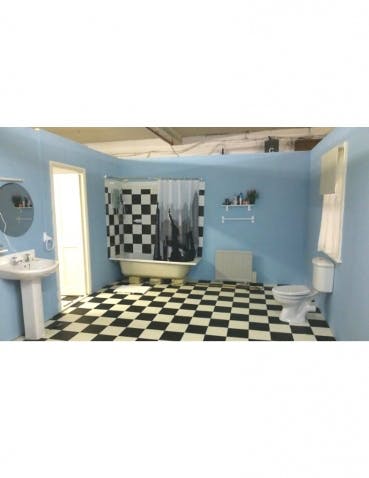 Matthew and his pals were worriedly getting closer and closer to deadline day with no real advances being made. Every door they knocked on previous for help had been closed until they knocked on ours. From receiving his initial email we immediately wanted to help and support Leeds’s next generation of students.

Matthew required numerous fittings in order to create a bathroom set for a short film. Passmore’s provided him with a bath, shower, toilet, sink and taps totally free of charge and what’s more donated the fittings to the film school for future projects.

Filming is now complete and was a great success. The piece is currently being edited before being passed onto sound design and then onto final completion.

Below are some images of the set and Matthew & his group in action.

Personally everyone at Passmore’s thinks the set looks amazing – 1st’s all round from us, well done everyone!

The set can be seen pictured to the left.