Mr & Mrs Threapleton had a large square shaped, colour co-ordinated (fixture & tiled) bathroom suite consisting of a matching two toned corner bath, pedestal basin and small corner shower enclosure with gold finishing touches to suit. The dated setting which would have been the height of fashion in the 80’s was consistently designed so everything would match including the coral & brown gradient tiles which detailed a bird image in its applied formation.

Although the suite was still in great working order it had become tired in its look and feel. Wanting to make more of the available space as part of the wider renovation project Mr & Mrs Threapleton contacted More Bathrooms to survey, design & quote for the works. 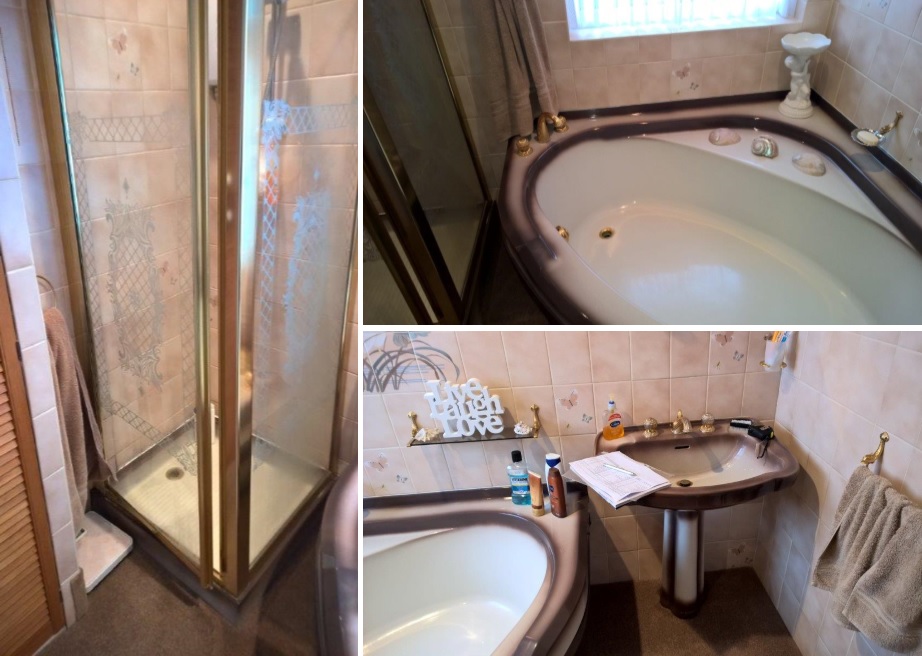 Wanting to keep the functionality of a 4 piece suite Mr & Mrs Threapleton were keen to make the most of such a large space. The bath in the existing suite took up so much room that the shower was cramped and not easily accessible. Furthermore, and although they wanted both bathing and showering fixtures included in the refurbishment, Mr & Mrs Threapleton made it clear that they wanted to change the suite’s dynamics making the newly designed shower area the statement feature.

Garry Kirkbright, More Bathrooms Surveyor & Designer, worked with the couple to facilitate a design that would cater for all their wants, needs and desires. Presenting an updated and modern version of the 4 piece bathroom suite all key fixtures resided in the same locations however now worked with the room rather than against it. Garry proposed a large D shaped corner shower enclosure with low level step to meet the couple’s core requirements and suggested a curved corner bath to give the illusion of a luxurious bathing experience that required minimal space.

The finished suite was an unbelievable transformation. From dark and dated to light and modern the new 4 piece bathroom was spacious and bright with every single key feature accentuated due to its elegant design and installed location.

The new large D shaped shower enclosure was grand and luxurious which further set the tone for the remainder of the suite. The room was stunningly finished using large cream and textured wall tiles with wooden panelling to the floor. Over the wood effect vanity basin unit lay an illuminated mirror which, when switch on of an evening, created a warm and relaxing environment – perfect for those long soaks after a hectic day.

“Our bathroom has been transformed! From the designer, Garry, coming out to give a quote, followed by Steve the installer – everything ran so smoothly. We have to say a first class job was achieved.

Steve is the most well-mannered, conscientious, hardworking person, an absolute credit to your company. We are highly satisfied & delighted with the project. Thank you all so much!”