Mr & Mrs Harker had an 80’s style bathroom which was in situe when they bought the house a few years previous. The grey coloured suite was the height of fashion within this era and was one of the final coloured suites to be manufactured following 2 decades of flamboyant colour schemes.

The bathroom needed updating for sure – it had withstood 20-30 years of use and more than this Mr & Mrs Harker wanted to make their house there home. Due to the durability of products, partly a result of home owners of this era’s reluctance to refurbishing this functional room, products & styles were made to last and as a result the bathroom was the last room the couple had to put their own mark on. 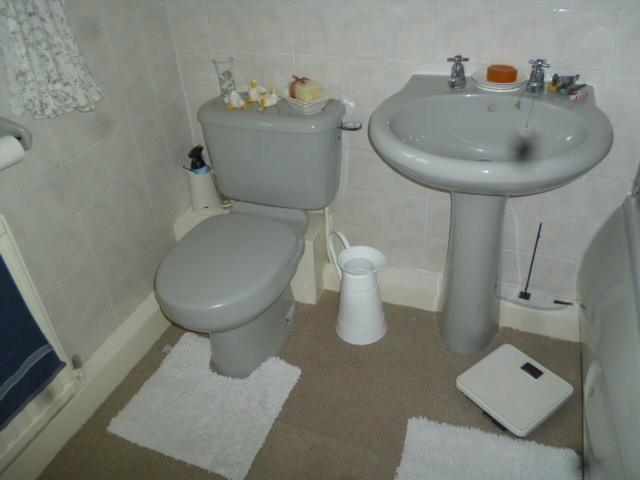 Mr & Mrs Harker were a traditional customer who enjoyed the finer things in life. The old styles and fixtures available for interior design really caught the couple’s eye which could be witnessed throughout their home.

Paul Tarbard, More Bathrooms surveyor & designer, worked with the couple to present a traditional bathroom setting which flowed and complimented the theme running through their home. Using the very latest traditional styled sanitary wear Paul was able to design a 4 piece timeless classic which still had a modern twist.

The black floored, white & grey ¾ tiled finished suite was what can only be describe as a ‘traditional gem’. A relatively small room was transformed into a 4 piece, timeless class detailing a free standing claw tub bath, low rise WC toilet, an Edwardian themed round pedestal basin, royal traditional radiator and Georgian style mirror.

Every bathroom needs one statement feature and Mr & Mrs Harker’s’ bathroom was no different. Tucked away in the corner of the room and enclosed behind a floor to wall glass screen was a wet floor shower detailing a traditional style, exposed ridge shower mixer with handset – the ultimate traditional come modern twist bringing these historic period in to the 21st century.

what mr & mrs harker said about more bathrooms, part of the passmore:

“We would just like to thank all at More Bathrooms for the work carried out for us. Paul Tarbard who designed and organised everything and Andy Dennison who did the installation were extremely helpful and professional in everything they did. Andy was very pedantic in his approach and we were so glad he is a perfectionist because our finished job is perfect.

We were told by another company that what we wanted was not possible in our sized bathroom but Andy and Paul proved it could be done and we had great pleasure in showing the other company the finished job.

Thank you once again – we would recommend you to anyone thinking of having a bathroom done – regardless of size, style or personal requirements – we know you would get the job done.”